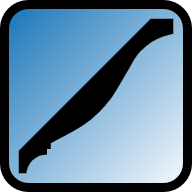 Have you installed, or tried to install crown molding but just couldn't get the corners to meet up correctly? Or did you get it right, but it took a lot of time and wasted material? If so, this Crown Molding calculator app is for you!

For Do-It-Yourselfers and Professionals alike, this Crown Molding app calculates the miter and bevel angles to use with a miter saw when cutting crown molding for installation.

Crown Molding supports both horizontal corners (for typical flat ceilings and mantels, etc) and vertical corners as required for cathedral or vaulted ceilings.

Easy-to-understand illustrations are displayed to assist with placing the piece of crown molding on the saw for the perfect cut.

No more guessing or wasted material. Cut it right the first time!

The following are images of the main screen for the app. The screens are similar for all of the devices with only minor differences between them.

Selecting the Help button in the lower-right corner will provide a display of the available help information.

The application takes two values as input: the wall angle and the spring angle. These inputs can be found under the Input heading in the top-left portion of the screen.

Given the wall and spring angles, this application will calculate the miter and bevel angles used to cut the crown molding so that two pieces will come together to achieve the wall angle at the given spring angle. These outputs can be found under the Output heading of the display.

The background color of the miter angle output will change to red if the calculated value exceeds the maximum miter angle value set in the preferences. See the Preferences section below.

The background color of the bevel angle output will change to red if the calculated value exceeds a maximum of 45°.

See below for a sample of one of the cutting illustrations. The illustration shows the table and fence of the miter saw as well as the arm, saw blade and shield.

The solid blue line indicates how to set the bevel position of the saw. Use this line to confirm that you have the miter saw set on the correct bevel position.

The large light green colored shape represents the piece of crown molding being cut and shows which side of the saw blade the piece to be used will be. The piece on the other side of the blade is the discard piece.

If you do not have a dual compound miter saw, you may be presented with illustrations with an orange shape for the crown molding piece instead of a light green piece as shown below.

Since regular compound miter saws cannot be set to a bevel angle on the right side of center, the saw must be used with bevel angle position to the left. This may result in an alternate placement of the piece of crown molding. The orange colored piece indicates that the top edge of the crown molding will be away from the fence (closer to you) instead of against the fence.

Crown Molding also allows you to calculate the cutting angles for cathedral or vaulted ceilings.

When in vaulted ceiling mode, the input section of the display will change to look similar to the following:

The ceiling angle is the angle of change in the ceiling along the current wall.

The Spring Angle is the same as for regular mode.

There are two methods to switch the app between the regular and vaulted ceiling modes.

The first method is to tap on the second icon from the left at the bottom of the screen. When tapped, this icon will change and will always display the current mode of the app. One of the following icons will be displayed:

When switching modes using this method, the app internally maintains different copies of the wall and ceiling angles. What this means is that when you switch back to the other mode, the last angle that you had entered in that mode will be displayed again.

The second method is to tap on the Wall Angle or Ceiling Angle label in the input section of the display.

When switching modes using this method, the app maintains the currently displayed angle and uses it in the new mode.

The preferences allow for customization of the application to match you and your miter saw. The preferences can be found by tapping on the Preferences button that looks like a gear.

The Maximum Miter Angle setting allows for customization of the maximum miter angle supported by your saw. Typically this will be 45 but could also be 52. If a calculated miter angle exceeds this value, the miter angle is displayed in red.

The Default Spring Angle setting allows for customization of the default value to use for the spring angle when the application starts.

The Allow Anonymous Analytics setting provides control over the anonymous tracking of user analytics. If set, the application will anonymously track and report, via a third-party analytics service, on some of the interactions you have with this application. No user identifiable information is collected. This information is collected to assist Fisherlea Systems in understanding how users use this application with a goal of improving the user experience.

Be careful not to scratch the screen of your device when using this protractor tool to take measurements.